Sunny Autumn days and another great harvest thanks to to all the fantastic people who are part of this project in particular the University Grounds Team, Sustainability Team, Transition Loughborough, Paul Conneally, BomBom Patisserie, LSU Action & Martha at LAGS. What we did:

Harvesting missions took place with the LU Nursery School, with LSU Action team & in partnership with School of the Arts & the Student Union.

Following the success of the GB Olympic Team – many of whom hail from or train at Loughborough University we decided to have our own Apple Olympics.

This included the ‘1km or so’ run around the Fruit Route, apple (not shot) putting, balance an apple on your head race and the egg and apple race.

Participants wore not numbers but the names of fruit tree varieties that are planted on the Fruit Routes. The ‘Ikm or so’race was only validly completed if all of the participants crossed the finishing line at the same time. The mixed variety team succeeded in doing this successfully.  Competitors included ‘Ingrid’ ‘Merton Biggereau’ Floribunda’, the ‘Doyenne de Comice’, ‘John Downie’, ‘Farleigh’ & ‘Victoria’, ‘Ingrid’, ‘Charles Ross’ & ‘Oullins Golden’.

Artist-led Walk around the Fruit Routes

I invited Alison Lloyd to co-lead a walk with me this year and we worked on the theme of Edge & Contours. Info & images from the walk will be posted separately.

Marta from BomBom Patisserie ran a fun & informative baking workshop on Thursday evening attended by a mix of local people & students. This included top tips for pastry and fruit fillings and we all got the chance to make our own pie. Marta suggested some great fillings including apple and prune. She also made special Fruit Routes muffins with the campus apples which were served to visitors to the cafe throughout the week.

There were 5 categories this year: preserves; under 12s; savoury dish;sweet dish & gluten/dairy free.

We had an overall winner which was the Apple & Custard Bakewell from the U12’s Tegan and Rose Sawbridge see recipe below so you can try this at home. We are producing our own Fruit Routes recipe pocketbook this year so watch this space.. 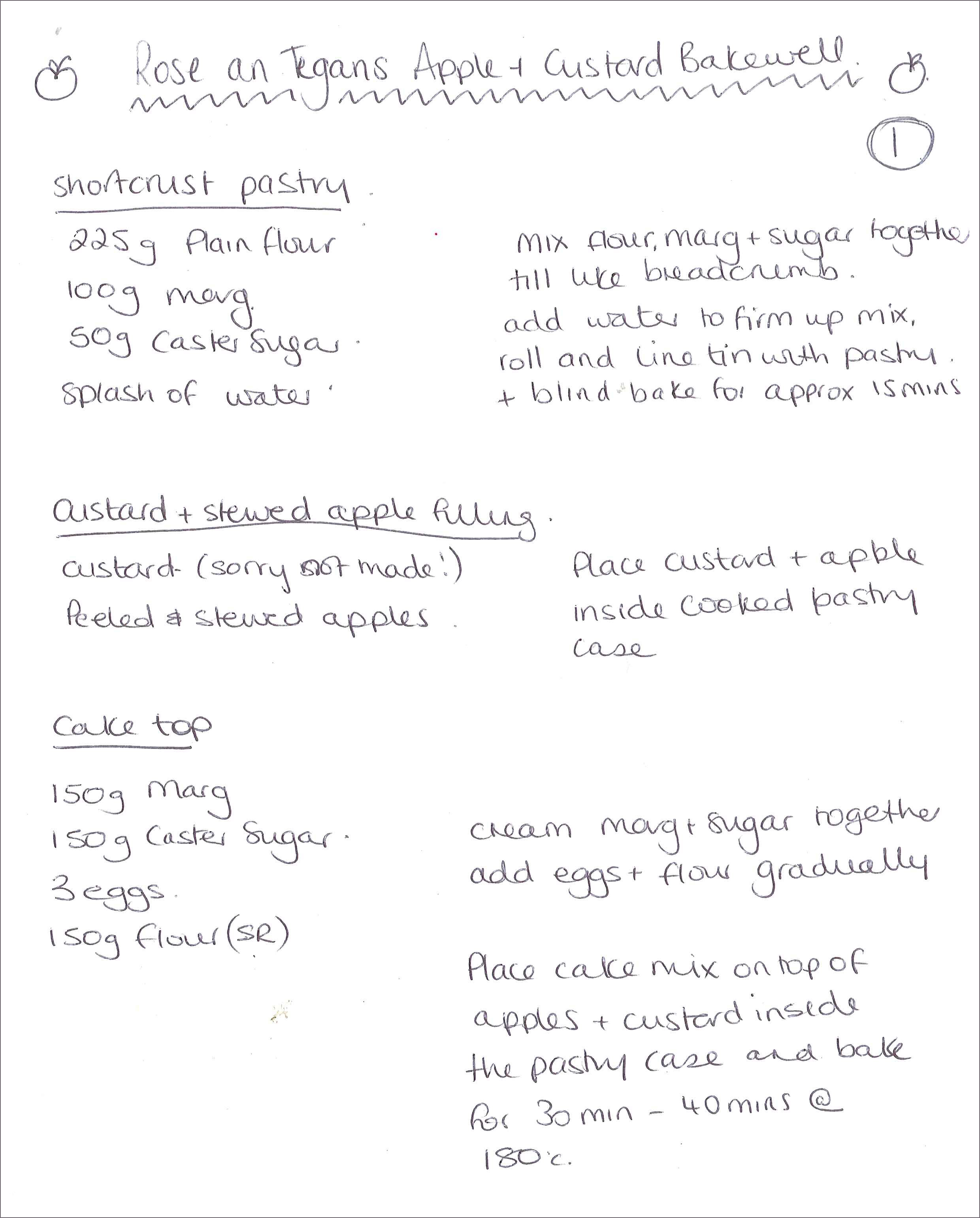 Other winners as follows:

After the judging and prize giving the bake-off treats were shared by everyone. This was followed by pumpkin carving & a bonfire.

Transition Loughborough were with us for two days pressing campus apples. Most of the juice was given away but we managed to pasteurize some bottles to keep through the year. This year we saw our first apple hair washing (see pic. above).

Look forward to seeing you all again soon to celebrate 5 years of Fruit Routes!

Any cookies that may not be particularly necessary for the website to function and is used specifically to collect user personal data via analytics, ads, other embedded contents are termed as non-necessary cookies. It is mandatory to procure user consent prior to running these cookies on your website.